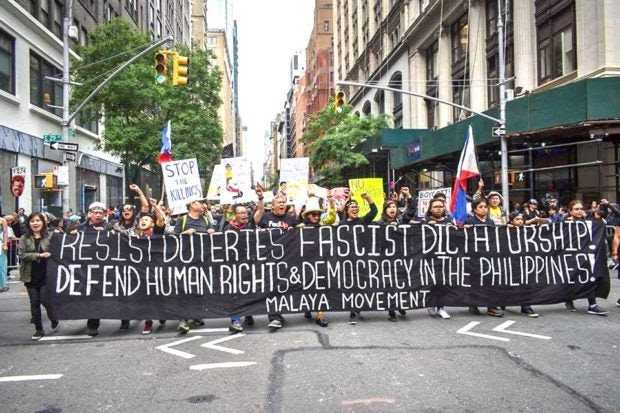 The anti-dictatorship movement in the Filipino American community helped oust Ferdinand Marcos during the 1986 EDSA People Power uprising. That spirit of opposition to repression and injustice didn’t go away after 1986.

When President Rodrigo Duterte launched his War on Drugs in 2016, leaving thousands of mostly poor victims dead, the killings and the administration’s impulse to heavy-handed rule rekindled the spirit of opposition in the Fil-Am community.

With their US taxes used as aid in procuring weapons, intelligence, and the war on drugs, as well as Duterte’s closeness to Trump and China, many community leaders and activists have decided to begin educating the public about a “looming dictatorship” in the Philippines.

On February 6, 2018 twenty-five community leaders from all over the US, many of them former anti-martial law activists, faith leaders, academics, youths, entrepreneurs, and human rights advocates, launched the US-based alliance MALAYA (free): US Movement Against Killings and Dictatorship and for Democracy in the Philippines to condemn “increasing fascism” under the Duterte administration.

Since then they have been staging protests and campaigns on social media, including the hashtags #Babaeako and #Hindipendence day.

“I joined Malaya and agreed to be a co-lead convener due to the urgent call in organizing ourselves in the U.S. We cannot stay idle,” says Dr. Alma Trinidad. Born in Hawai’i to Filipino immigrants who worked in the sugar and pineapple industries, Trinidad is a professor and social worker who is based in Oregon.

Trinidad’s activism began as a youth, when she observed social problems in Hawai’i like gang violence, drug and alcohol abuse, school drop-outs, teenage pregnancy, poverty, immigration, labor issues, among others.

“(We have a) role as Filipino Americans. We can influence change by engaging internally in our Filipino community, as well as externally, advocating for policies, locally and globally, that meet our needs and advance our voices,” Trinidad believes.

“It is my hope that we continue to popularize our Filipino American history in a given region in the U.S., share with others our family migration stories and analysis of what led to the current conditions and lived experiences, some of which are traumatic, of our families and communities. It is through these means we can find authentic freedom, ways to move towards healing, and advance progress in sustainable and humane ways,” she explains.

Dr. Trinidad calls on to the Filipinos to stand and promote a democracy that benefits the least fortunate and the majority of ordinary Filipinos. She believes that it is unity that will bring promise.

Chrissi Fabro’s parents disliked activism. Her mother even accused her of being communist-inspired. Nevertheless, Chrissi decided to become an activist in college, where she had learned about the history of Filipino immigration to the US and the reasons why thousands of Filipinos like her parents left their homeland. The New York-born Fabro is a community health worker and the external vice-president of Kabataan Alliance.

Fabro was inspired by the Filipinos’ history of resistance, and the trafficking of Filipino workers in the US moved her to serve the community.

“Even though times are dark in our motherland, there is a rising resistance movement that shines a light of hope for our country and people.  Our unity and resistance can and will bring down a dictator as it had done in the past. I wanted to be a part of that and contribute to the fight for freedom and democracy as a US-born Filipino,” Fabro explains.

Activism is a responsibility

Gina Apostol, an award-winning author who started her activism at UP Diliman, is a dual citizen of the Philippines and the U.S. She joined Malaya because she wanted to be in an organized united front.

“The Duterte regime needs a united front to oppose him. I wanted to be with a very organized, united front organization. We need to focus, organization, and unity against this fascist regime. We can’t pretend we can do things on our own.”

Professor Nerissa Balce, was moved by the photographs of the extrajudicial killings, which circulated in social media. Along with the human rights activists, she says that photojournalists are becoming modern day heroes in their covering of Duterte’s brutal war on drugs.

“I believe it is my ethical responsibility, as a Filipina academic and an immigrant, to join a movement to stop the killings and to stand against dictatorship. Any Filipino immigrant, now more than ever, is affected by tyranny or an oppressive government,” she says.

Professor Balce claims that the Filipino American communities are open to the message of organizing against the extrajudicial killings and Duterte’s authoritarianism. “I see this openness when I give my lectures on the photographs of the extrajudicial killings. A lot of young Filipinos, and some older members of the community, are eager to discuss the issues,” she says.

On June 3rd, while the Philippine Consulate in New York was holding a parade in celebration of the 120thIndependence Day of the Philippines, over 400 Malaya members and supporters staged a protest dubbed as the “March for Human Rights and Democracy in the Philippines.”

The celebration was a mix of Duterte and anti-Duterte supporters. There were people dressed as mangoes and bananas; the Batangas group held its banner to show the diversity of the Filipino American community.

Apostol told the group that the Batanguenos are fighters and resisters and were one of the last to surrender to the Americans during the Philippine-American. She encouraged them to join in the fight against Duterte.

“We need to keep fighting against a government that kills its own people. That is part of history, part of our sense of self as makabayang Pilipino. Fight and speak up for those who are dying, who are under the gun, who are dead. It is an unjust regime that makes shoot-to-kill a norm rather than a travesty. It is patriotic to resist it,” Apostol said. “Be on the right side of history! Join us. Join Malaya and our movement against fascism and tyranny in the Philippines. Filipinos in the U.S. have nothing to lose but their apathy.”

TO END US SUPPORT FOR THE DUTERTE REGIME! DEMAND A SENATE HEARING NOW!